!!THIS IS A REPOST FROM OUR BLOG WRITTEN BEFORE THE ELECTION!!

“Safe?” said Mr. Beaver. “Don’t you hear what Mrs. Beaver tells you? Who said anything about safe? Course he isn’t safe. But he’s good. He’s the King, I tell you.”  ~C.S. Lewis~ (The Lion, The Witch, and The Wardrobe)

I’ve been thinking about a few things over the last few days that I’m going to write about. I tend to focus my blog posts directly towards politics and where Faith collides I weave it in…Today I’m reversing that.

The first thing I want to make clear is that my Faith is ALWAYS before my politics, but Collision of Church and State is directed towards a larger crowd. Collision is centered in current events and the activities of our politicians, and we try to provide an explanation of WHY exactly people of Faith should be involved…Today I’m placing politics on the sidelines to discuss why Faith should not be weaved into our lives, but why our lives should be weaved into our Faith.

In so many areas, Religion has replaced what was designed to be the most beautiful relationship we will ever have.

Facebook has provided us the ability to proclaim what we’ve done for Jesus that day. “I’m just here to post about how amazing Jesus is!”…We proclaim the verses we’ve read, and how much WE love Him. OR, we proclaim how much WE realize that HE loves us. It’s good to remember what Augustine said; “The sufficiency of my merit is to know that my merit is not sufficient”. I believe that sometimes our posts cross the line between wanting to give God the Glory, and allowing ourselves to be the filter for that Glory. My favorite saying of all time: “The only successful witness, is the one who points at the cross and then ducks”. We’ve lost the purity of the relationship. We’ve become humble and proud of it!

SIDE NOTE: The above point is not to insinuate that talking about Jesus on Twitter and Facebook is bad. I do exactly that. It is to remind ourselves to grab the mirror and examine where our heart is when we post those things. WHO is getting the actual glory.

Religion is commercialized…On Facebook I get requests to “share this photo” if I dare claim to “Love Jesus”. I just imagine Jesus telling the disciples “Why haven’t thou followed me on Twitter yet?”, like our salvation is somehow hinged on a cheap declaration found on a social media site. Like the dark underworld found a loophole into breaking off the once “un-pluckable” salvation by using the most diabolical three words in the English language: “Share this if…”.

Wouldn’t it be nice if it was that easy? What if hitting “Share”, “Like”, or “Follow” automatically put our name in the good book? You go sin and get flagged or reported for questionable lifestyle, only to instantly gain forgiveness and redemption when you retweet a bible verse, favorite a disciple, or post worship lyrics? But that’s not life, it’s not reality, and even though so many of us live in a way that places God at about the same importance or relevance level as the above description, we should rejoice in the actual and yet often ignored reality.

Everyone that knows me is aware of my slight obsession with C.S. Lewis, on Twitter my location is listed as Narnia, I’ve had SO many people DM me inquiring about that location choice…Maybe it’s a clever way of not listing my actual location, or maybe somewhere deep inside I would love to leave this world, it’s politics, it’s pain, and it’s suffering, and just walk on the beach with Aslan by my side. Though we know that Aslan can never be anything near the image of Christ, and I am in NO way saying that…But I find that in some way he is so much closer than the human images I had been shown for years. I could never accept the human ideal of Christ, I could see the actor or look at the pictures and feel as though I couldn’t relate to this human image of an indescribable being…I also know that C.S. Lewis said on many occasions that it was just a story, and I concur. The mysterious animals aren’t real, and in the end it IS just a story…A story with STRONG undertones, but a story.

For some reason I sob when I read The Chronicles of Narnia or watch the movie…for some unspeakable reason between the 2 manmade ideals, one being a probably inaccurate photo that seems to bring peace to some by putting a face to the name, and the other a Lion…I tend to relate to the Lion.

“At the name of Aslan each one of the children felt something jump in its inside. Edmund felt a sensation of mysterious horror. Peter felt suddenly brave and adventurous. Susan felt as if some delicious smell or some delightful strain of music had just floated by her. And Lucy got the feeling you have when you wake up in the morning and realize that it is the beginning of the holidays or the beginning of summer.”

For me the idea of Narnia explained something so intricate in such an elementary way. My relationship with Christ. Sometimes my King and Kingdom felt so far away, but his nearness was just on the other side of the wardrobe. His fingerprints were on me, and His whispers and guides were in my world. I felt His presence in my life, but longed for the visual, touchable magnificent being I knew existed on the other side of the wardrobe. Not a man, but something so much more powerful…Gentle enough to hold me, but strong enough to protect me. To me C.S. Lewis just gave me a visual to an already present reality, and for that I am a fan. Maybe you’re reading this thinking “Is she crazy?!”…No, I know the books don’t align completely, but the concept is what I’m going after here…So when I talk of Narnia or Aslan in this post, just think it through.

When I hear talk of religion my heart feels something that isn’t described by Lucy, Susan, Peter, or Edmund…It feels dull. I read a post the other day that said “The end is coming, you’d be crazy not to believe in a God”…All I could think was “No Atheist in a Foxhole, right?”. But what a dark idea that is…Not the “finding God” part, but the “I’m finding God only because of the turbulence.”. That my friends, is religion at its finest. I am so thankful for those coming to Christ during these turbulent times, but I hope that it is for the right and real reasons…that the seed is planted in the fertile soil, per se.

Knowing that Aslan is great and powerful was just one aspect, knowing his love however…THAT was the beauty. Remove everything about Narnia from your head, now think of Aslan as just a powerful being with no personal attachment to you, and no discernable care…Would you cross into the wardrobe? Or would you only enter if dangers where insurmountable? No, the truth is that we can only long for the other side of the wardrobe because we long for Aslan.

I’ve read the end times prophesies and I believe that we are living in them… I am struck with “mysterious horror”, sometimes I’m suddenly “brave and adventurous”, and sometimes feel fear and peace at the same time. Do I feel like I should let go of politics? No. Fighting for what is right shouldn’t be hinged on the promised outcome, it should be hinged on the dedication of the one that promised us that outcome, and what He stands for. He told me to stand for Israel, so with Israel I will stand. If Romney wins I still believe that the world has already changed and that America is forever changed/changing, this still plays into end times. If Obama wins I believe we are on a much faster track. I’m living in this world, but my heart is in the most peaceful Narnia (think it over). I fear the future of this world, but I’m promised a different future. I fight for this nation, I brace myself. My faults are fear, selfishness and being dissatisfied when I’ve been gifted with what should bring full contentment. But when I stop for a moment and think, I’m reminded of the gift I’ve been given to witness these times…Let’s face it, as we watch the news unfold, as we witness this world, Faith is swiftly changing from believing what’s unseen, to seeing what was once only believed.

At the end of the day we all have to look at ourselves and at our God and KNOW that he is in control. We fight the politics, or like me, you fight them with snark…when I shouldn’t. I always say that I’m that one child that constantly has the parents head shaking…

This world, for lack of a better way to put it, has lost its mind. But more importantly, we lost the most important aspect of our lives…The church (as in the people) have forgotten the relationship. We are walking around with knowledge, walking around with this belief system, leaping in and out of our foxholes…But right now, right this moment we are beginning to witness the roar.

“And now,” said Aslan presently, “to business. I feel I am going to roar. You had better put your fingers in your ears.”

What a frightening and yet beautiful roar it is.

Ending this I’m going to throw a few thoughts out there. The most frequent accusations or questions thrown a Christians way are concerning all of the “rules” that they believe you have to follow or live by to get to heaven…What an inaccurate depiction of our relationship. I always compare it to a marriage where the husband says “No matter what you do, I’ll always love you, if you cheat on me, hit me, swear at me…etc I’m still never going to leave you because I signed a marriage contract promising to always love you”…It is BECAUSE of that dedication that a wife would stay faithful and try her hardest to be what she is supposed to be, unless her heart was never there in the first place. It isn’t because salvation is looming over our heads, it’s because His dedication and faithfulness is living in us. Because of this relationship I am happy that my salvation ISN’T as easy as a Twitter follow away. It isn’t graded by my Facebook and Twitter posts. It’s depth is not judged by the multitude of times I talk about my bible studies.

I don’t know about you or where you are in your life…But “If I find in myself desires which nothing in this world can satisfy, the only logical explanation is that I was made for another world.”…Focus on politics and do what is right, but always remember WHY you are. Don’t just follow Christ because the times are hard, and don’t just encourage others to follow Christ because the times are hard. Show them why the relationship is more important. Show them why stepping into the wardrobe is worth all of the responsibility and choices that come with it quite simply, because of Aslan. 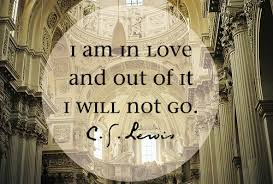